Certified in Radio and Communications Repair

Essence Baker was born and raised in Rochester, NY and is the youngest of four siblings. In 2011, being
undecided on what career path to choose, Essence joined the United States Army. While in the Army
she received experience in Radio Communication System Repair, and Human Resources. After receiving
this experience she determined that her interest was in human resources. In 2013 Essence transferred
into the United States Army Reserves and began her career as a human resources specialist. She
maintained this position for nine years.

In 2015 Essence relocated to Charlotte to be closer to family who had moved several years before. While
still maintaining her position as a Human Resource Specialist with the Army Reserves, Essence also
pursued a career as an office manager at Lincoln Speech Services, Inc. Here she was able to put the
leadership training she learned in the Army to work. However, while working at Lincoln Services, Inc.
Essence started to gain an interest in the Law. Therefore, when to opportunity to work at Kimberly
Saxton &amp; Associates, PLLC opened up she jumped at the chance.

In her free time, Essence enjoys discovering new restaurants and karaoke nights with her son. While in
the military her love for traveling also grew with her favorite duty station being Fort Wainwright, Alaska.
Due to this she loves traveling whether it is day trips to the mountains or extended vacations to the
beach. Essence also volunteers her time with Autism Speaks and Making Strides against Breast Cancer
in support of causes that are personally important to her. 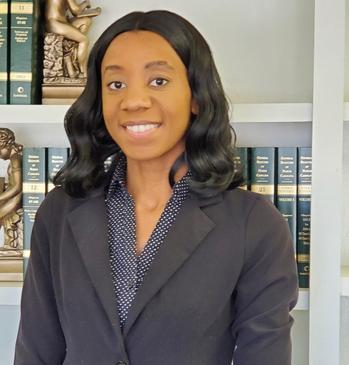